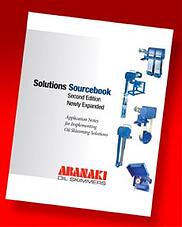 Click here to receive a copy of our Solutions Sourcebook. This 43-page handbook offers application notes on more than 40 real-world implementations of oil skimming.

Recently, a US automotive parts engineering facility contacted Abanaki Corporation about two issues it was having at its plant. The first issue the company was facing was the high costs of constantly needing to replace its coolant, due to oil contamination. They wanted a way to separate the oil from the coolant in hopes of being able to reuse the coolant and cut down coolant disposal costs. The second issue was removing the oil from the wastewater recovery trenches. The plant manager contacted Abanaki salesman John Logar hoping Abanaki would have a machine center skimmer to solve both of the problems. 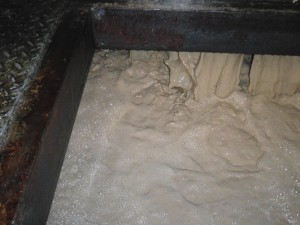 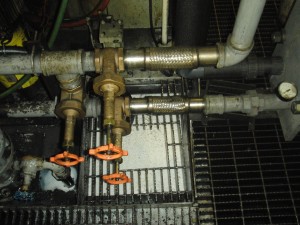 After visiting the company’s facility and understanding how and when the machines run, John knew that the Tote-It machine center skimmer would be a winning solution and would solve both of the issues the company was experiencing. The Tote-It utilizes a continuous belt and wiper to remove up to 12 gallons of oil per hour from the fluid surface. The belt operates on a motor and pulley system attached to a stabilizer bar that is immersed in the contaminated liquid. After traveling over the head pulley, the belt passes through tandem wiper blades where oil is scraped off both sides of the belt, and discharged through a 1-1/4 in. ID hose. The tail pulley has flanges which allow it to roll freely on the inside of the belt without becoming dislodged. It does not need to be fastened to the tank. 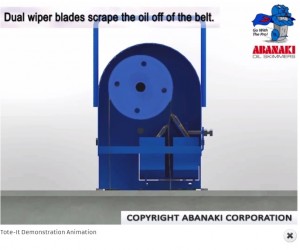 See the Tote-It machine center skimmer in action in this animated demo!

The Tote-It machine center skimmer is especially well suited for parts washing and machining center applications. By removing surface oil from a wash tank, the parts will not be recontaminated as they are withdrawn. Removing tramp oil from a coolant tank prevents excessive smoke and fumes due to oil burning during cutting operations. It also reduces bacteria growth in the tank, along with the resulting odor.

Once the facility utilized the Tote-It skimmer in both the cooling tanks and the recovery tanks, it was able to successfully remove the oil from the coolant and the oil from the wastewater, respectively. Additionally, with the ability to clean the oil laden coolant, the facility was able to save a significant amount of money and time on what would have usually been spent on coolant disposal costs.

For more information about the Tote-It or any of the other machine center skimmers Abanaki offers, click the photo below!