Selecting the right belt material is just as important as selecting the right skimmer. Choose the wrong belt and the skimmer will not work correctly. Things like pH, temperature, and oil type are crucial considerations.

A belt is to a skimmer like wheels to a car’s chassis: although the latter is the most identifiable part, it needs the former to actually run. Just like tires, belts are not one size fits all. Just as there are snow tires, street tires, year-round tires, and more, so too are there a variety of belt materials. So, what purpose does each serve? 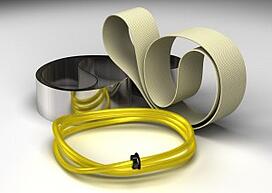 There is a great deal of variance in applications where belt oil skimmers are present. Figuring out what would be the best belt material for your belt skimmer will depend on a few factors. For the most part, belts pick up the oil in the same fashion so the big difference is finding what will give you the longest operating life.

Steel belts are the standard for many applications. Their durability, corrosion resistance, and strong oleophilic tendencies make the material effective in most scenarios. The lower price and ease of welding also reduce costs. The biggest caveat is their ineffectiveness when confronted with rust inhibitors in wash water. Steel belts are also ineffective in most applications where Petro-Xtractors are used.

Elastomer belts are an alternative to steel belts that perform well in a multitude of situations. These belts can handle some of the harshest, most abrasive conditions a skimmer can be placed in and are fully compatible with the Petro-Xtractor. Still, steel belts will not stretch when exposed to UV rays over a long period of time.

This video demonstrates how choosing the right belt material makes all of the difference. The Fuzzy belt does a better job at picking up the hydrocarbon than the standard belt on the right.

LFO belts, commonly referred to as Fuzzy belts, are a proprietary skimmer belt exclusive to Abanaki. This material specializes in the rapid removal of light, non-viscous hydrocarbons from water.  If your problem is an oil like gasoline, the Fuzzy belt will remove it much more efficiently than any other belt in normal conditions. The Fuzzy belts are also extremely resistant to stretching.

More information can be found in the Abanaki Oil Skimmer Factbook or Abanaki Belt Selection Guidebook. It is best to call (440-543-7400) with details of the application and ask your Abanaki representative what will work best with your belt skimmer.